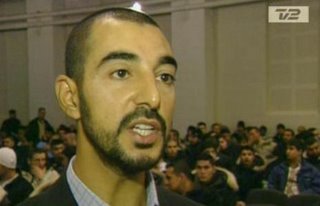 A court in Copenhagen last week convicted Fadi Ahmad Abdel Latif, spokesman for Hizb ut-Tahrir in Denmark, according to an item in Jyllands-Posten. Hizb ut-Tahrir is a radical Islamist organization, banned as a terrorist group here in the US, but still condoned in many other countries. That may be about to change in Denmark.

A unanimous panel of judges in a Copenhagen city court found Adbel Latif, the spokesman for the Danish branch of radical Muslim organisation Hizb-ut-Tahir, guilty on all three counts for which he was charged, including for distributing fliers in 2004 urging Mulsims to 'kill their leaders' if they prevented them from helping their 'brothers' fighting in Fallujah.

He was also convicted for threatening the lives of Jews by calling on Muslims to 'kill them all, wherever you find them'.

It comes as no surprise that Abdel Latif denies the accusations, saying his fliers had been misinterpreted:

Abdel Latif claimed that the flyers had been misinterpreted. He appealed the conviction and the three month jail sentence.

'This was expected. The decision is politically motivated. It's only intended as a way to force Danish Muslims to keep their mouths shut,' he said after the trial.

Right. I'm sure the fliers actually said kiss the Jews wherever you find them.

Unfortunately, Abdel Latif only draws a 3-month sentence for his hate mongering, and the article makes no mention of booting his fascist ass out of the country. On the bright side, the conviction may lead to the banning of Hizb ut-Tahrir in Denmark:

The government shelved a 2005 effort to dissolve the controversial organisation after the attorney general, Lene Espersen, said there was no specific reason to do so. But if Thursday's conviction is upheld, Espersen may ask the public prosecutor to determine whether if can be used to forcibly disband the group.

I posted an entry on Hizb ut-Tahrir back in March, which linked to their web site. Unfortunately, all the non-Arabic versions of their site have been suspiciously taken down, but here's a clip from their site that I was able to snag at the time:

Its aim is to resume the Islamic way of life and to convey the Islamic da’wah to the world. This objective means bringing the Muslims back to living an Islamic way of life in Dar al-Islam and in an Islamic society such that all of life’s affairs in society are administered according to the Shari’ah rules, and the viewpoint in it is the halal and the haram under the shade of the Islamic State, which is the Khilafah State. That state is the one in which Muslims appoint a Khaleefah and give him the bay’ah to listen and obey on condition that he rules according to the Book of Allah (swt) and the Sunnah of the Messenger of Allah (saw) and on condition that he conveys Islam as a message to the world through da’wah and jihad.

The Party, as well, aims at the correct revival of the Ummah through enlightened thought. It also strives to bring her back to her previous might and glory such that she wrests the reins of initiative away from other states and nations, and returns to her rightful place as the first state in the world, as she was in the past, when she governs the world according to the laws of Islam.

It also aims to bring back the Islamic guidance for mankind and to lead the Ummah into a struggle with Kufr, its systems and its thoughts so that Islam encapsulates the world.

This is a very scary organization, folks.

Danish Muslims are garbage that need to be shiped back where they came from. They want to come in to a country then suck down all the free welfair they can, then they want to take over the country they infested by murder and mayham. throw the garbage back!!!!