The Daily Mail is full of crap 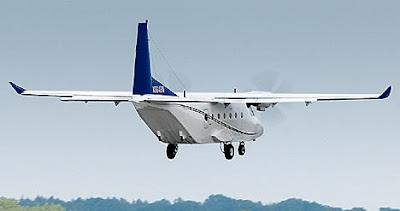 The little airplane that probably couldn't
The Daily Mail has an article today claiming to blow the lid off! Britain's complicity in CIA's rendition flights program. Setting aside for the moment the fact that the hysteria over the program is entirely fabricated by hyperventilating anti-US lefties in Europe (and, unfortunately, here in the US as well), the Mail's article appears to be, well, a load of bollocks, as some of my Brit friends might say.

The article centers around a twin turbo-prop airplane, with the US registration number N964BW. The airplane is a Spanish-made CASA C-212 Aviocar owned, according to the FAA, by Aviation World Wide Services and a sister company, Presidential Airways. Here's a screen shot from the N- number lookup I did myself:

But wait!! According to the Daily Mail, it's actually owned by none other than (cue scary music) Blackwater USA!

Records show the plane is owned by Blackwater USA, a CIA contractor described as "the most secretive and powerful mercenary army on the planet".

Actually, records show that the plane is owned by the companies named above, but that doesn't stop the Mail from intentionally misleading the reader. Later in the article the Mail further confuses the reader with the following:

The European Parliament report describes these as shell companies operating as subsidiaries of Blackwater USA, "an important contractor for the CIA and the US military" which bases the planes in Malta.

That the European Parliament describes them as such doesn't make it so. [See update below. --ed.] But this isn't the only load of bollocks the Mail is trying to peddle. The Mail claims to have traced the route recently traveled by N964BW. Here's the graphic of that route from their web article: 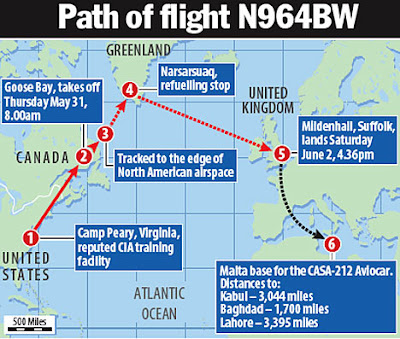 So let's take a look at the little airplane's itinerary:
And here's where we have a bit of a problem. The CASA C-212 only has a range of about 1,500Km. So the leg from Goose Bay to Narsarsuaq is the only leg N964BW could have made without the aid of extended range fuel tanks or fuel bladders on board, things which I'm not even sure are available for the C-212 without exceeding the airplane's max takeoff weight.

Which brings up the question of why, if you're the evil and all-powerful Blackwater USA/CIA you just don't use a freakin' airplane that can make all those intercontinental trips without modifications or playing hopscotch?

Extended range tanks (internal) are avaliable for all the CASA 212 series aircraft. The company I work for holds an STC for one such tank that (according to the pilots) will nearly double the range. I dont know how Blackwater got a bad rap, they are simply another buisness entity trying to make a buck. Thier Aviation unit is a legitamate part 135 operation that just happens to do work for the government (as do many of us in Aviation)

This airplane has been spoted in several location in Europe and recently in England. So the detail of how it went there does not matter to me. Frankly you have to believe in flat earth to deny that this airplane is own by Blackwater.

The Bush administration is a bunch of criminals in the sense that they trempled our constitution several time the same constitution they sworn to protect. This is not a partisan issue folks! Republican or democrat we have the right to a decent president not this.

The only thing that make me fell good is that in less than 16 months these neocons will be out of business and the next president can be only way better. I am also hoping for some prosecutions for the multiple violation to the US constitution.

Anon 1: Thanks for the info. I wasn't sure about the extended range tanks thing for the C-212, but I figured there had to be something available.

Anon 2: You're an idiot. I never said the airplane wasn't owned by Blackwater. Read the update. But apparently you can read all you want and still be an idiot.

1. The Mail were wrong because they said it was owned by Blackwater. Which it was.

2. The Mail were wrong because they said that plane could fly that route. Which it can.